A cannabis story doing the rounds on social media claims that supergiant fast food restaurant chain McDonald’s is to open marijuana friendly restaurants with special smoking pods, so consumers can enjoy their junk food with their healthy herb.

The story claimed two restaurants in Denver Colorado had already converted the children’s play areas into special smoking areas, complete with ventilation so the smell did not annoy other customers, with another 13 restaurants to follow suit by the end of 2015.

To those of you who thought the story might be too good to be true were indeed correct, it appeared on well known news hoax site Now8News.  Despite the fact the story was an obvious hoax that didn’t stop it getting shared over 50,000 times on Facebook.

The article stated “each facility will consist of fifteen smoking pods in which customers can smoke a joint, bong, or pipe without being harassed or bothered by people who are offended by it.” and that “ McDonald’s will not be getting into the sale of marijuana or marijuana edibles. However, they do welcome their patrons to have a smoke before ordering.”

The article came complete with a badly photoshopped image of a restaurant, which clearly was not a McDonald’s, with ridiculous looking hangers from the ceiling that were obviously fake.

This site is one of many satirical websites, in this case one that does not post a disclaimer identifying it as such. With no disclaimer, gullible folks will always believe this type of content to be true, no matter how outrageous the story. Chris Bovey, owner of cannabis seed retailer Pot Seeds last year proved how easy it was to hoax people with a short video clip of a plane dumping fuel and a short caption “I filmed this on a plane, what the fuck are they spraying from the airplane wing?”.

Chris knew full well what the video clip was, since he was on the plane travelling from Buenos Aires to London, which had to make an emergency landing in São Paulo, Brazil, shortly after takeoff, due to an unidentified burning smell in the cabin; so the plane had to jetison the fuel to lighten the landing weight. However, although he did it to prank a few friends, the video clip soon went viral, with now over 1,750,000 views and nearly 30,000 shares on Facebook, cited as evidence of chemtrails.

When Chris returned to the UK he added further fuel to the fire by falsely claiming on Facebook that he had been detained by military police at Heathrow airport and had his iPhone confiscated. A number of conspiracy theory websites picked up on the story without checking the facts and he was later invited to tell his story live on the Richie Allen Show on the David Icke radio network, where he came clean and admitted it was a hoax. The story later gained international coverage in Vice who covered the chemtrail hoax. Despite the fact the Chris Bovey admitted it was all a hoax, one year later the story is still being shared on Facebook as evidence of chemtrails.

You can hear the interview with Chris Bovey and Richie Allen here on Soundcloud:

So alas, McDonald’s will not be introducing weed smoking pods, which would actually not be legal in Colorado anyway, since although the recreational sale of cannabis has been legalised in the US state of Colorado, it is still not legal to smoke marijuana in public places and that includes McDonald’s. 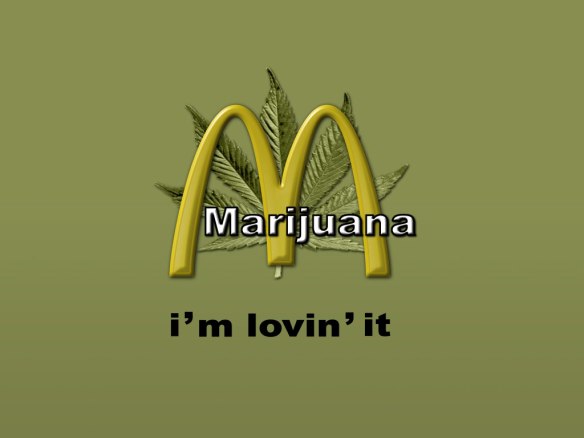 This is not the first cannabis hoax article to go viral, a few years ago, a hoax story claiming Monsanto were to produce genetically modified cannabis was widely circulated on the internet.